The bachelor level degree project at Umeå Institute of Design is a ten week, self initiated and driven, project focused towards product design and together with a partner company a final concept is developed.

Cycleurope was chosen as a partner company due to their long experience in the bicycle industry, launching their first Monark bicycles over 100 years ago. Making them as much a bicycle manufacturer as a Swedish institution.

Bicycle theft is a problem that most people have had to face at some point or another. Where it can be both a loss of property and a loss of transportation it is at least always a hassle, one large enough that many people do not bother reporting the theft to police or insurance companies.

About 70 000 bicycles are reported stolen every year in Sweden alone, approximately 300 000 in the United States. The cost to bicyclists and insurance companies are mounting whereas the bicycle lock industry is booming. Considering the amount of bicycles reported stolen every year, and the vast amount of unrecorded thefts, this is an issue that needs to be dealt with, sooner rather than later.

A survey was carried out among both casual bicyclists, biking enthusiasts as well as among people who regularly did not use a bicycle at all. The results were were interesting in that a lot of people had a low level of trust in their locks, even the ones with highest security ratings, while also being afraid of having their bicycles stolen when left in a public space.

What is even more interesting is the amount of people who does not report the theft of their bicycle to law enforcement. One respondee to the survey even considered bicycles to be merely borrowed from the universe until they inevitably get stolen again.

Upon starting this project several insurance companies were contacted but interest from their side was low. Over the last ten years Swedish insurance companies paid at average 70 million Swedish crowns ($10 million) to people who had their bicycle stolen. Realizing their annual budget it is a small drop in the sea, and the effect it has in loyalising customers is worth a lot more.

A lot of time was also spent researching current bicycle locking systems, their strengths and their flaws. Some locks are easier and some are harder to either pick or to force open, but no lock is impossible to open in some way. Most cable locks can be cut rather easily, U-locks can either be picked with a simple BIC pen or forced open with a small car-jack or battery powered angle grinder. There are many videos online that expose the faults in even the most secure looking locks. The best locks, the ones that give the most time, are the ring locks that are attached to the bicycle frame, common mainly in Europe. They are notoriously hard to pick and hard to access with other tools.

Though locks only buy time, not safety. If a thief really wants to steal your bicycle your bicycle will be stolen, eventually.

Law enforcement sees bicycle theft as a low priority crime mainly because most bicycles do not cost a lot of money and because the thief rarely left enough evidence to be tracked from the scene of the crime. In fact, in Sweden, less than 2% of reported bicycle thefts ever get solved.

There is also an attitude from the public that “it’s not my problem” when a bicycle gets stolen. Bicycle thieves can steal bikes in broad daylight without anyone from the public caring. It’s never been made more apparent than in the video above made by the Neistat Brothers in which they steal a (their own) bicycle from a number of busy locations with a number of different tools.

So what if we could make something that both keeps your bicycle safer, helps you keep track of it, helps law enforcement in the case of a theft and engages the public? Is it possible?

Since the problem was split on one side the user and on one side the system that would support the device the work was split accordingly. First and foremost to create a device that would fit existing bicycles, have a high ease of use for the user and be hard for the thief to manipulate. Secondly it had to be able to fulfill an information flow both to the user, to the law enforcement and to the general public.

Through the survey many users expressed a need to be able to track their bicycle, even if only to make sure that it still is alright. There are already tracking systems for vehicles, even pets, but their size restricts them to attaching externally if being used on a bicycle. Since anything placed on the outside of the bicycle is an easy target for manipulation and violence focus shifted instead to fitting something inside the bicycle, camouflaging it from sight and from mistreatment.

A device was developed that fits inside the seatpost tube and is held in place by heavy duty rubber wings against the inside of the tube. Concept testing was made with a weighted working model to ensure the device would stay put no matter the abuse caused by either vibration or violence.

Inside the device sits a RFID reciever which talks with your bicycle key for the purpose of locking and unlocking your bicycle depending if you’re near your bike or not. A new lock was not developed due to project constraints but existing locking technology was instead adapted to fit this concept. A ring lock was chosen for its outstanding track record and was modified to allow for automated locking and unlocking. In the event that batteries run out between charges the lock can be unlocked manually with the key, although in such an event the tracking functions will not work.

The device also contains a GPS reciever and a SIM-card. If your bicycle is being moved without having been unlocked the device wakes up and checks its status and location. If it is indeed being moved (as opposed to someone just having bumped it) it notifies you via text message that you probably should check up on your bicycle. If it senses further movement it updates you with location data either accessible raw through your mobile phone or with a map on your smartphone.

Once you have verified that your bicycle is indeed stolen you can simply tag it by forwarding the text message to the police. When the police have recieved the message they can, through the GPS reciever constantly updating its location, track and apprehend the thief. A vast improvement over today’s method of not being able to act as first responders, at all.

Further a community for owners of this device would be set up in which the status would be updated as well. The device could update towards that community, towards Facebook, Twitter and other social media, to make sure that your friends who possibly could be nearby could also either check on your bicycle or even aid in its recovery.

As long as you carry the key with RFID-chip in it with you the bicycle is locked and unlocked automatically as you leave or approach your bicycle. The rod-like unit goes inside the bicycle frame and is held in place by the rubber wings, staying there, anonymously, as the brains of the bicycle. A thief would be none the wiser if a bicycle has one of them or not. Finally, the ring lock attaches to the frame and fits around the back wheel. Since it is obvious even from afar if the bicycle is locked or not you do not have to worry whether it’s locked or not when you leave your bicycle.

A normal day with the lock would require no time manually locking and unlocking, your bicycle is always ready when you approach and safe when you leave. 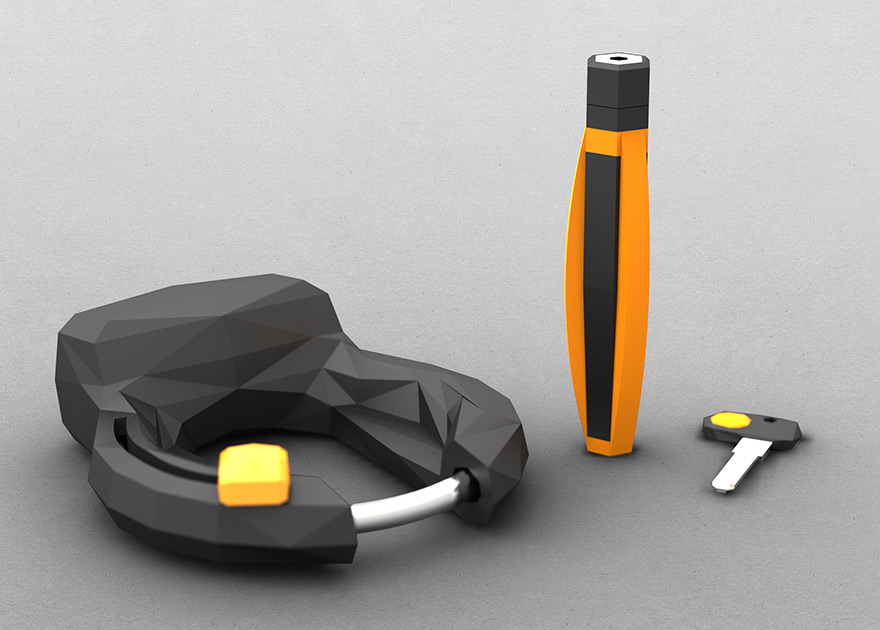 The parts of the final concept side by side.