How can we create opportunities for the city-dweller to explore new interesting areas as well as the urban visitor to find their way around the city?

This project was initiated as part of a form course at Umeå Institute of Design but developed into a device which spans beyond just form into interaction and spatial exploration.

There is a great challenge where new meets old, where the consumer culture of “here today, throw away tomorrow” meets the devices that still work after decades of cherished use. Much of the inspiration for the city navigator came from just these vintage devices, especially so vintage cameras. This combined with both current and future technologies such as smart phones and tablets to even The Guide from Hitchhiker’s Guide to the Galaxy.

Various form explorations were rigorously tested with users to understand what worked the best to handle, carry and interact with. Results shifted towards a medium sized product, about the size of a smartphone, to combine both adequate space for touch screen interaction and small enough form-factor to still be comfortably portable. 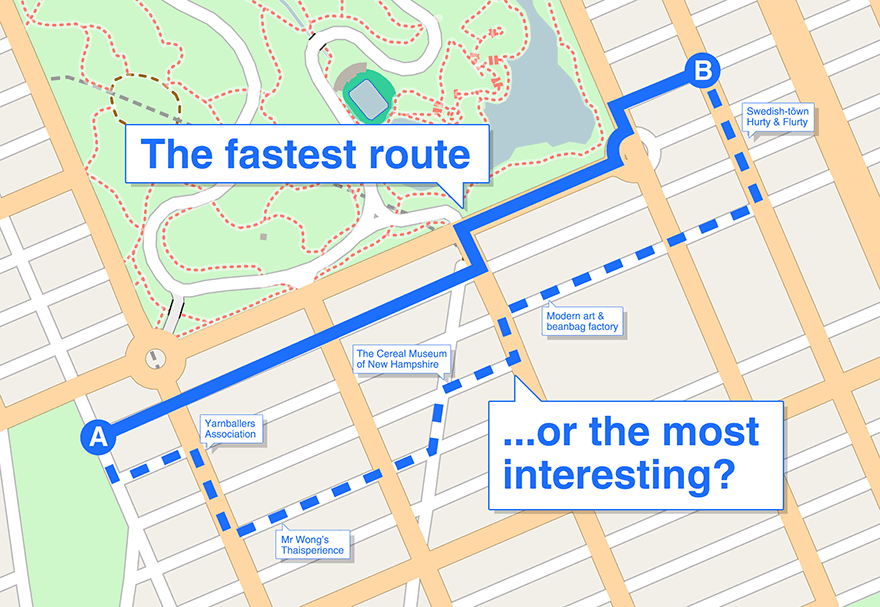 Interaction with the device would include an initial setup phase where you can feed in your interests and as much or little personal data as you wish you offer. Combining with services like Facebook or Foursquare additional data could seamlessly be updated into the navigator. Based on the inputs the navigator suggests new paths for you through the urban landscape, routes that pass by places which it thinks you might like.

The interface of the device changes depending on which direction the user is facing. When the device is facing the ground the screen shows a map view with an overlaid route, as well as markers where you are, where you are heading and other locational data, much like a standard GPS navigator or application.

The final device is machined from a solid piece of aluminium, covered in leather (or pleather) both to give a trustable weight as well as a surface that is both comfortable to touch and durable to make the navigator last.

It’s a device that gives an urban experience out of the ordinary, a device that lasts, that you can cherish over time. The more you use it the more beautifully it wears. While a designer cannot control how a product is used or how it wears we can still give it the best possible circumstances.