UID Cookie Box was a two week project together with Alexis Morin and Sharon Williams during the autumn of 2012 at Umeå Institute of Design (UID).

The cookie box was created out of a desire to give something to people at the school. 50% social experiment, 50% unexpected behaviour and 50% cube equals 150% deliciousness! 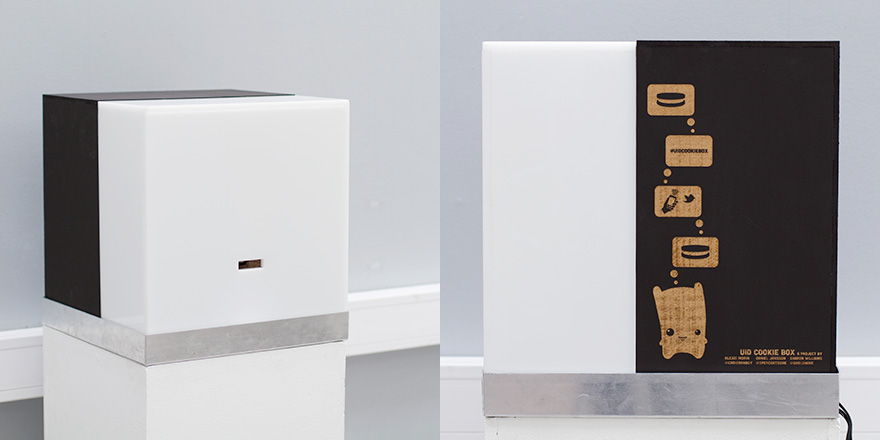 The actual box is made from a thick acrylic plastic and fiber board placed in an aluminium tray. Part of the reason of the split design was to make the refilling and service easier, although precautions need to be taken to prevent tampering of the insides.

After testing, and failing, to see how well and fast the rumor mill would spread the necessary information about the cookie box and the twitter hashtag required it was decided to put instructions of its usage on the side of the box instead. This was done through laser etching the surface of the painted fiberboard.

The insides of the box is controlled by an Arduino which talks with a computer wirelessly via XBee. The computer is running breakout.js and node.js to take care of controlling the Arduino and talking with the Twitter API. The way we managed to set it up means the lag between a tweet being sent to the machine pushing out a cookie can be counted in seconds, wheras in the first iteration of the cookie box it could at times be counted in minutes. The code for the project is available on github for anyone to take part in.

Since the lure of cookies is too strong for some people to handle some control functions were built into the cookie box. To prevent people from overfeeding themselves with cookies the box will not push out another cookie if you already tweeted within five minutes, instead it will blink red as a visual indicator that you should slow down. Also, to prevent cookies from piling up on the floor in front of the box due to repeated tweets the machine will simply ignore your request if there already is a cookie in the slot. This prooved to be an especially important feature as people not in the vacinity of the box started retweeting wondering what was going on with the new delicious hashtag in their friends’ tweets.

The cookie box was placed in the school public during two events for testing and correcting of glitches and troubleshooting. The cookies ran out rather quickly, which is why wooden pucks were made with a message to contact the cookie administrator (i.e. either of us who worked on it) for restocking the box.

The longterm goal is to put the box permanently in the school and have it stocked with cookies as often as possible. Delicious cookies for everyone! Concerns about public health notwithstanding.

So next time you’re in Umeå, Sweden, come by, tweet with #uidcookiebox and grab yourself a cookie!