Up, Down, Left, Right

The game ‘Up, Down, Left, Right’ was as experiment made during a course at Umeå Institute of Design where the aim was to learn how to interface with HIDs (Human Interface Devices) such as gamepads.

The simple purpose of the game is for you, the black square, to escape the red square. The red square gets progressively faster as the game goes on making evasion harder and harder.

‘Up, Down, Left, Right’ can be played in two different ways, either you hold down the buttons of your gamepad to move around in nigh real-time, getting chased by the red square. Or you do deliberate moves one at a time with the red square making one move for every move you do.

Every time you die, and die you will, a ghost is created that follows your previous movements. Every successive play generates a new ghost eventually making your playing field littered with past iterations of yourself, and their inevitable failure.

If hearing this doesn’t discourage you, you can download and play the game yourself, providing you have a machine which runs Windows. Click the image opposite to this text to download the 6mb zip file which contains game. You will need WinZip or similar unpacking software to be able to extract the files out of the zip. 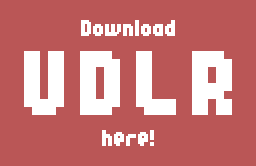