A look at integrating wind power into rural areas together with the Umeå company Energytower AB and their newly developed wind turbine. The mission was to improve the design of the wind power turbines while at the same time changing its function for the better. 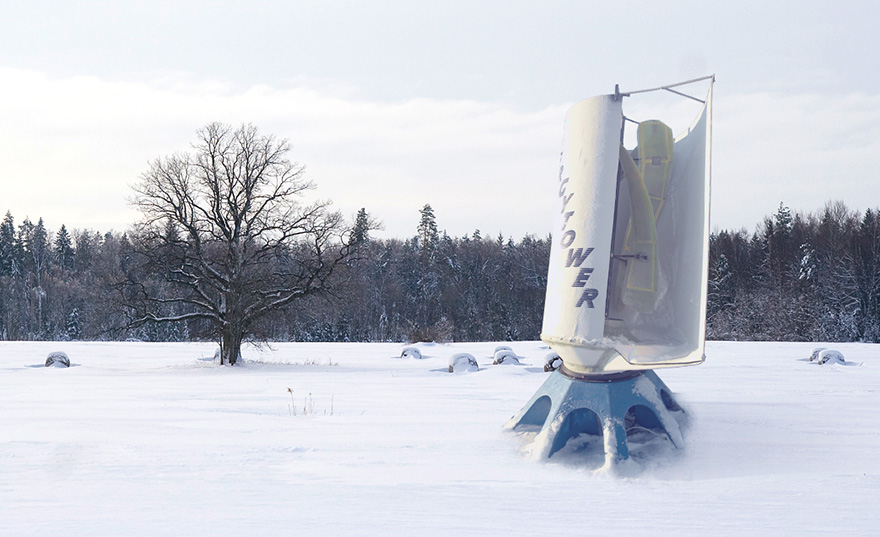 The Energytower wind turbine as it looked when the brief was received.

Wind turbines have always been an eyesore for people living in rural communities. Wide spread belief that it scares cows, causes grain to grow slower and spooks birds have long been arguments against the establishment of wind turbines. Luckily with private ownership of wind turbines this suspicion has started to ease up and where there before was just an ugly tower users are slowly starting to see a symbol of green energy and of a way to gain revenue.

Still the wind turbines need to be made more attractive for the land owners both in terms of aesthetics and in terms of function. The Energytower wind turbine is already much lower in noise as well as more discrete, though more work can still be done with the integration into the rural landscape and its architecture.

The final proposal is a 15 meter tall tower, still keeping the internal core tilted as per Energytower requirements, designed to blend in with the rural architecture with its barns and silos.

The exterior of the wind turbine is replacable, giving each owner the opportunity to personalize their turbine to make it stand out or blend in more with its surroundings. The turbines could even be branded for both advertisement as well as brand recognition for rural companies.